SOUNDS OF THE TEXAS UNDERGROUND

By Ryan A Vasquez

Band in the hot seat: Athanatos

There is a new breed of brutality. One which combines a very difficult skill level death metal sound along with dynamic instrumental compositions that not only take the audience through an incredible audio interpretation of their fiction, but defines the caliber of musicians they are. Originated and recorded in New Braunfels, Texas, the currently unsigned free agent band Athanatos released their 11 track debut album entitled “Obsolescent Existence” (O.E.) in November of 2016. Those who appreciate a solid tech-death sound and have an optimistic ear for musicality may find several elements about this album to satisfy their need for something brutal and have their minds blown with something musical.

When in the wrong hands, the product of recording and rendering speed and death metal may end up this concoction of “extremely furious” mixed with “absolutely confused.” These practices make it difficult for the listener to grasp any one instrument, let alone understand where any of the songs are going, and ultimately compromises the true experience all listeners were suppose to have.

This was not the case for Athanatos‘ chosen studio team for O.E. Ethan Houston (who happens to be the drummer) and Navene Koperweis deliver professional grade sound engineering with exceptional clarity on every band of audio making it easier for the listener to follow any musician’s part from beginning to end.

And after listening to O.E. over and over, recognizing the sequence of the songs and understanding what listeners may take away from this experience, I ask both readers and listeners to consider this theory:

The way the material is written and presented is formatted particularly so, in order to properly guide the listener through the timeline of sequential terror from the opening conflict, to the midpoint of subservient acceptance leading to the finale of uncertainty and despair. So try to imagine this entire album as one grand overture, one giant musical piece named O.E. written in 11 movements and organized in three phases–

Phase I – the end of civilization

The first four movements (or studio tracks two through five minus the intro) describe a setting where mankind is under attack by the machines and technology (in this case personified) is determined to eradicate most of mankind’s existence and enslave the rest of any survivors. It also wouldn’t matter if humans were to rise up in revolt because the world was already doomed with mankind’s self-inflicted devastation involving greed, commercialism and the lack of decency toward each other and the planet. Below are some examples of this theme taken from the prints of some merch. 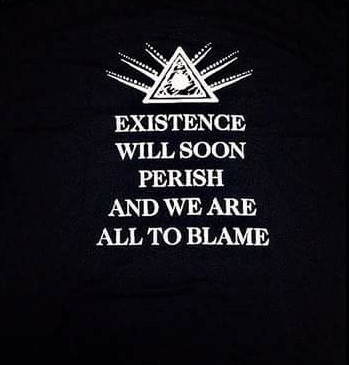 Back print of t-shirt / photo courtesy of Facebook.com/athanatosofficial

The next two movements (or instrumental tracks six and seven) take the listener through the sorrow of a mass annihilation among humans and the surviving few have accepted their life sentences of absolute servitude and obedience toward the machines. The pages of this musical score will not exhibit any patterns or familiarity with death metal but will instead shift the approach and execute a non-aggressive musical composition that dynamically interprets the setting and tone at this point in the Armageddon.

The remaining movements (tracks eight through eleven) will delve further in the progressive-influence of their song writing more so than the beginning of the album. This approach adds a psychological dynamic to this point in time in the Armageddon by helping convey the uncertainty, the frustration of human failure and the longing to redeem mankind in a world of hopelessness in the musical composition as well as in the lyrics.

Now that the end of the world is outlined, O.E. begins with the intro track “Oblivion,” which is a 48 second orchestral piece consisting of elongated mischievous tones on the keys accompanied with heavy-handed single strokes on the snare and bass drum in a simple pattern. Simultaneously, there is a dialogue spoken in a slightly muffled voice as if recorded through a phone conversation. This individual’s speech is conveying a warning about the uprising of technology against all mankind leading to global domination and how the machines will ultimately eradicate the human race. The next opportunity for a breath of fresh air isn’t due until track six, so the listener should prepare before entering this first phase of movements, especially if anxiety under extreme or stressful situations or environments is an issue.

After 48 seconds of this disgruntled gentleman’s dialogue, “Mechanized” begins– the first movement (or studio track) of this tragic overture and crucial first impression to all including the Texas underground circuit. This track may very well be understood as the solid structure which defines this band’s style of death metal, as the listener will hear both the aggressive side and the creative progressive influence meticulously constructed together. Mechanized will also set the pace for “Putridity,” “Genocide” and “Deception,” the three tracks that follow which will share a similar approach with an emphasis more on the death side.

Listeners may hear a fusion of influences ranging from Deeds Of Flesh to bands like Aborted and Dying Fetus on the death side. Fused with the death influence is a progressive style of song writing similar to the sounds of Between The Buried and Me, Fallujah and The Faceless. Even with the speed of tech-death with the complexity of a progressive technique, the timing is mathematical, confidently executed and cleverly constructed. These first four tracks exhibit something special from each of the musicians and will already have your full attention to remember their name, where they’re from and what they bring.

The dominant force behind the microphone, Juan Garcia, adds his fuel to the fire with well executed highs for the screams and deep octave lows for the growls and grind-style singing. Listeners may recognize several vocal influences with a similar style such as Dan Watson of Enterprise Earth and Scott Lewis of Carnifex for the highs and voices like John Gallagher of Dying Fetus and Travis Ryan of Cattle Decapitation for the lows. Listeners may agree Garcia‘s vocal performance is the right fit for the music and his voice alone is enough to incite a pit, or so I felt when I was listening on.

Laying down the tablature and musical notation for the end of this civilized world are Johnny Dirickson and former member and recording guitarist Jake Scott. After two minutes and 18 seconds into “Mechanized,” listeners will notice the furious fret board death riffs come to a break for a melody change. The interesting thing about this counter melody is the band’s un-shy approach to fuse this cleaner, softer music writing and surprise the listener with the volume taken down to a mezzo-forte (moderately loud), pedals off the distortion, simplifying the tablature and letting the riff sing instead of yell and scream. Dirickson and Scott will come from slamming out a power riff, much like the main riff in “Genocide,” only to follow it with a prog-style melody to make a different statement inside the same story, then return to the original strength and speed of the start of the song.

Once listeners arrive to the title track(s) of the album, this will mark O.E.‘s halfway checkpoint and phase two in the theme sequence where these instrumental movements describe the scenes of “Autonomy“ and “Servitude.” Dirikson‘s lead strings accompanied with Houston‘s drum pattern integration of skillful with heaviness take center stage in “Autonomy” then return to a jam session worthy enough for Garcia‘s vocals in “Servitude.”

Bassist Nathan Luna starts the second half of the album (and the final phase of movements) with an intricate note pattern riff taken at an accelerated tempo, sure to reignite the adrenaline in “Questioning.” Listeners may agree Luna adds a prog-style new school death approach his writing. Interesting melody changes happened leading up to the instrumentals and he consistently demonstrates an advanced skill level tablature throughout the second half, as well.

And speaking on consistency and advanced skill level writing, Houston completes this band’s rhythm section and ties it all together musically and tech-wise from beginning to end. Listeners may agree his professionalism and outstanding technique proves his worth as one of the top tech-death drummers in the state today. Listeners will notice his snare-to-tom patterns requiring disciplined finger control yet refrains from relying on snare blast beats for more musicality. Instead Houston‘s double-bass patterns, if my calculations are correct, periodically range from 225 to 250 b.p.m.’s (beats per minute) to implement that need for speed.

The editor’s pick of this album goes to “The Progression Of Human Failure,” the second to the last track just before vocalist Chaney Crabb of Entheos (ex-members of Animals As Leaders and The Faceless super group) makes a guest appearance for the finale. The “Failure” track demonstrates both the brutal technical death side of themselves with an equal share of the dynamic new school influence so cleverly constructed, should this band receive air-play on a local / state level or satellite radio, perhaps this track should make rotation.

Athanatos is a true Texas powerhouse with this debut album, and listeners as well as I, anticipate a brutal continuance from these New Braunfels crafted musicians.