March brings some of the biggest traditions of the year–the country’s best college basketball teams compete for the national championship title and anyone who is Irish, has ever wanted to be Irish for a day or just enjoys a good pint has St. Patrick’s Day. For Texas, concert goers, pit starters, body surfers and stage divers gather for the biggest live music month which is the start of tour season. For metal heads, the circuit is amped and ready to split floors open all across the state all month long.

Two of the first shows of March in Texas include Cleric of Dallas at Renos Chop Shop in Dallas and Covina of San Antonio and GnarWolf of Austin at Bonds Rock Bar in San Antonio. RoM – TUJ had a chance to find out more from each of these bands about their best shows, writing and the never ending balance of life and being a musician.

Once the listener presses play, there’s a slight chance the gates of Hell may open right there where they stand. From the hub of all north Texas metal, Dallas, comes a five piece death metal outfit with a devil behind the mic and hell followed with him.

Cleric began their journey in 2008 / 2009 but added current vocalist Zach Christian to the line-up in 2011. They developed a sound of death metal inspired by similar styles of Nile, Dying Fetus and Six Feet Under. With so many years in the circuit, they’ve had the opportunity to share the stage with such acts as EyeHateGod, Power Trip, Mammoth Grinder and Ghoul but Cleric remembers these particular occasions to stand out a little more:

“We had one show in Harlingen a year ago where Zach Christian had some sort of stomach bug and was on and off stage during the set [but] never missed a vocal part…” Cleric as a group said.

“We played New Orleans for the first time…back in 2015 and the whole experience was exceptional,” Cleric as a group said. “Venue was bad ass, bands were great, Chris [Richardson, guitarist] set his hair on fire at the bar and half the band stayed up till the sun came up hanging out on Bourbon Street.” 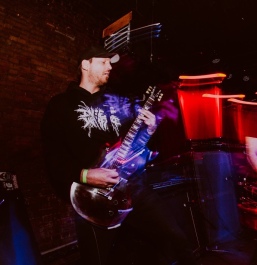 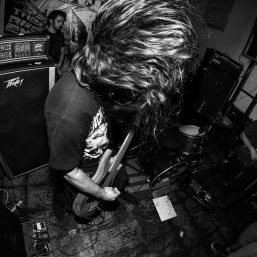 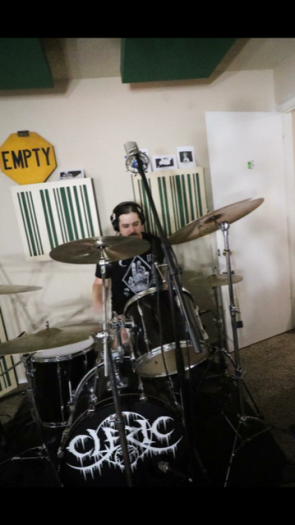 Reflecting on the past also taught them things, experience from the speed bumps down the road. None of which was a devastating blow to their career but definitely a learning experience in the music industry.

“The main thing has been keeping momentum going,” Cleric as a group said.

“We probably took longer than we should have to come up with a follow up to ‘Gratum Inferno,’ but that came with some line-up changes in between and some personal issues here and there,” Cleric said.

Cleric’s debut full length album “Gratum Inferno” was released in 2013 and had fans raving about their signature old-school death metal feel leaving them eager with anticipation for some new material. Cleric gave RoM – TUJ the scoop on the new release which is coming soon.

“The new album is recorded and mastered,” Cleric said. “We’re waiting on the artwork to be completed and then we’ll go from there. Probably won’t see the album till later this year / early next year at this point.”

In fact, Cleric has been so busy in the studio determined to keep said momentum going that they mentioned an EP to follow the new album we just mentioned due to the amount of material created and ready.

To all readers and and audiences that have not had the opportunity to listen to Cleric’s work or experience this devilish band live, Cleric describes the music and their live set as follows:

“It’s kind of a mash up of Old School Swedish and Florida Death Metal with some blackened elements,” Cleric said. “As far as  what people can expect live…buzz saw guitars, unrelenting drums, crushing bass tones and the voice of a rotting corpse spewing occultist recitations.”

From one of the busiest metal circuit destinations in Texas, deep in the heart of Spurs country, comes a six-piece hardcore breakdown band with a highly energetic stage presence and a powerful vocal team.

Covina began their career in 2015 and developed a sound of hardcore which fuses metal and punk in a melting pot sounding similar to the inspirations of Every Time I Die, The Ghost Inside and Gideon. So far, Covina has shared the stage with some of the most successful names in the industry today. Joey Sandoval, drummer, reflected on some of their more notable performances and shared with RoM – TUJ the most unforgettable shows to date.

“The Aztec Theater [in San Antonio] opening for Parkway Drive, We Came As Romans and Counterparts–hands down the coolest show to be a part of, ” Sandoval said. “The crowd was huge, the atmosphere was amazing and it was a blast. Also, we played The Paper Tiger [also in San Antonio] with Upon A Burning Body and then another time with Fit For A King and both shows were awesome and we got a lot of love.”

When a band receives more and more exposure leading to larger crowds generating higher ticket sales, that band becomes more in demand to promoters and circulated more widely across the state and beyond. Oftentimes, this leads to many challenges and sacrifices each member will have to endure for the sake of the band. When asked if Covina, as busy as they are in the circuit, has experienced any significant difficulties in this constant struggle, Sandoval feels for the most part Covina has not.

“…we are pretty good at balancing personal lives and the band,” drummer Joey Sandoval said. “We have our ups and downs, but we are determined to make something of this band.”

“Rise.Fall.Repeat” is Covina’s 2017 sophomore release and first full length album following their 2016 six track EP “The Dream.” Drummer Sandoval explained to RoM – TUJ why Covina favors the end result of their latest album over the debut EP despite some crowd favorites:

“We feel our sound has become more defined with ‘Rise.Fall.Repeat’ whereas ‘The Dream’ EP was a little all over the place and you could tell that we were searching for the right sound,” drummer Sandoval said.

When it came to writing “Rise.Fall.Repeat,” RoM – TUJ learned that lead guitarist Nathan Firkaly would start the process with an idea at practice, then bassist Josh Allen and Sandoval determines what fits and what doesn’t followed by dual vocalists Julian Cruz and Eric Garcia providing a fresh perspective on the content. And although rhythm guitarist Johnny Rivera was on board after this project was well underway, Sandoval stated Covina is excited to begin writing with him.

To the audiences that have yet to hear Covina’s material or experience their live set, Sandoval said this:

“We have some metal, punk, hardcore and southern style riffs in our music,” drummer Sandoval said. “We never stop moving and we try to put on the best show possible for the crowd. It’s a loud, sweaty, fun and intense show.”

Traditionally, werewolves have been portrayed as huge, bloodthirsty, man-like beasts with both sharp fangs and claws and covered with hair from head-to-toe. But in the land of the weird, Austin, Texas, subtract everything except the hairy face and you get something that can only be described in one word–gnarly.

This wild, crazy and out-of-control four piece known as GnarWolf (GW) began in 2014 and developed a unique prog thrash / hardcore sound which audiences may hear inspirations from Norma Jean, Darkest Hour and Evergreen Terrace. Guitarist Trent Dierking looked back at the many shows they’ve done over the years and determined some of their best performances were not on an official stage, RoM – TUJ learned.

“We used to throw house shows last year and those were probably the funnest shows we’ve played, just a bunch of friends raging,” Dierking said. “We’ve only played Sidewinder [in Austin] a few times, but they’ve always been good to us and their shows are always lit.”

With so many cultures, artistic views and varieties of genres in Austin and Texas in general, having such a unique sound of hardcore as GW has raises the question whether or not this style created is beneficial or challenging in recruiting new fans. Guitarist Dierking didn’t feel GW’s sound or strategy manifested any complications in their career regardless of any particular location.

“Austin provides a really great central location for us to easily reach areas around Texas,” guitarist Trent Dierking said. “Austin only provides challenges if you aren’t willing to expand beyond the city.”

“‘Abandon’ had the music primarily fleshed out before Andy [Jones] (vocals) joined, or during his first few months,” Dierking said. “We had a lot of core ideas for ‘II’…but Andy added a lot of input through the writing process for our second EP.”

Over the years of countless performances and many nights dedicated to their music, juggling home life and day jobs with GW responsibilities is an artform itself. Guitarist Dierking shared only a few words with RoM – TUJ which sums up their take on this issue:

“Music is love, music is life, Get in the damn van!,” Dierking said.

And as for the audiences that have yet to discover GW or experience them live, guitarist Dierking described it as follows:

“Like a freight train that hasn’t derailed yet,” Dierking said. “There may be blood. Ok, there’s definitely going to be blood.”