…but deliver us from Texas

The gospel according to Whore Of Bethlehem

In today’s congregation, not only shall we stray from the path and follow a much darker testimony, but also experience the enlightenment of two albums blackened death metal artists Whore Of Bethlehem (WoB) of Austin, Texas can deliver.

As we go forth, remember the light only shines so far down.

RoM – TUJ had the opportunity to speak with guitarist Phil King.

In order for the readers to fully understand this root of all evil, we take it back to 2009 and work our way through each circle of hell until we’ve reached the surface where this band was taken to greater heights with “Extinguishing The Light.”

RoM: On the official website the bio states–“The band was established to break away from the signature brutal death metal sound of Texas with a more blackened and sinister approach.” What was going on in the Texas scene at the time?

Phil: This is a great question! At the time when [WoB] was starting to kick around, the local metal scene was very engrossed in the brutal death metal and slam metal sub genres.

Bands like Devourment were very prominent, Viral Load, Insidious Discrepancy, Disfigured, Scattered Remains, Eviscerated, Prolicide, Uncleansed, Desecrate The Faith, Sarcolytic, Perversum, Devour The Unborn, Images Of Violence, and many others with a similar brutal death metal or slam metal sound. A couple of our current and past members also played in some of these bands.

RoM: Who were the influences that inspired WoB’s sound?

Phil: Our collective influences are numerous, but the big ones are all classics from their respective genres:

Dissection, Morbid Angel, Cannibal Corpse, Suffocation, Dark Funeral, Immortal, Nile, Arch Goat, etc. We feel each of us pulls from different bands more than the others as a part of our particular instrument play style and song writing which allows for more interesting song ideas.

RoM: With member changes over the years, how did the current lineup find one another? / When did the band know the chemistry was right to start moving forward?

Phil: The current lineup came together about two years ago. 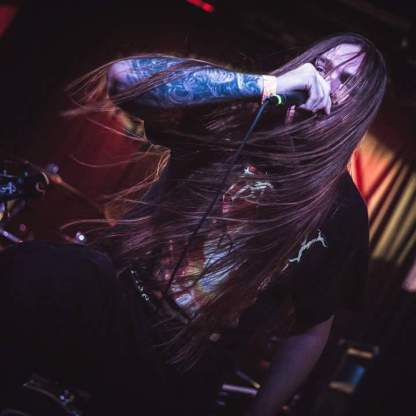 James Vandenberg – vocalist for Whore Of Bethlehem / photo courtesy of Facebook.com/wobethlehem
Sam [Axelrad], our drummer, is a close friend and co-worker of James’ [Vandenberg, vocalist] and James asked [Sam] to try out for the band shortly after we parted ways with Rene [Martinez, former drummer]. At the time Sam was playing for Cathexis but was interested in what we were doing and successfully tried out.

[Sam’s] an excellent and solid drummer, not to mention a great fit for the band. Alan [Berryman, bassist] and his bass came with him from Cathexis to join a band with a little bit more blackened influence.

Being good friends with Sam and James also helped bring him to try out.

The chemistry was pretty evident after a few short months. No one has a huge ego about any of the processes which allows us to create without shitting on other people’s ideas or get into unnecessary pissing contests. 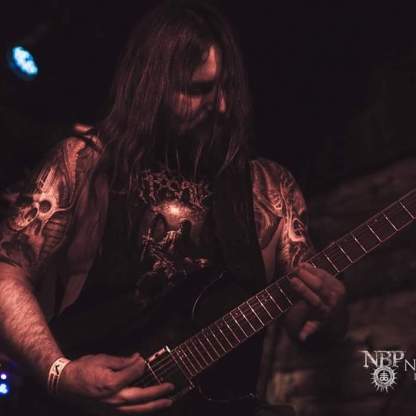 It meshes together very nicely, like a group of friends hanging out and jamming music like we all wanted to do in the first place.

Phil: “Upon Judas’ Throne” started our trek into national touring. We headed up north up through Oklahoma, Illinois, Wisconsin, etc. The tour went great and encouraged another tour the following years.

We’ve since headed up the west coast through California and once more up north through WI. Locally…what we were doing live helped grow our fan base substantially. We’ve also had the fortune of working with some amazing promoters in the area and have a good working relationship with many of them.

At the end of 2017 we decided to keep 2018 more focused on short tours and festivals, and as such we’re playing the Las Vegas Death Fest X next month. [Sat. May 12, Day 2, After Party Show] and Chicago Domination Fest V in July. [Fri. July 27, Day 2, *only Texas artist scheduled for the entire three day event this year]

RoM: Was there anything significantly different with WoB’s mindset going into the studio for “Extinguishing The Light?”

Phil: The difference in mindset really came from Mike [Michael Day, sound engineer at Amp Studios]He did the engineering for our “Judas” release and really wanted to do “Extinguish” with us. He actually reached out about the album before we were ready to look at studios to record!

On the previous record [Day] handled the recording and mixing, but the mastering was handed off to someone else in the studio.

This time around Mike wanted to handle all aspects of the record and we were very excited with the end result. Mike was awesome to work with the first time and even more so the second.

Very flexible, [Day] made our variably busy schedules work and let members come and go as they needed and plan out their dates for recording.

We all trusted each other, including Mike, to bring the best version of the album to realization.

Phil: BMML has been a good backbone for the “Extinguishing The Light” album release. They helped us with PR, distribution and promotion of the album through multiple channels. We’d certainly be happy to work with them moving forward at the present time.

Phil: Obviously we’re working on new tunes for the next album and planning for additional festivals and tours…basically more music, more merch and larger shows!

RoM: How would you describe WoB to those who have yet to listen or see live, what can they expect?

We have a lot of elements [from] Belphegor, Behemoth, Necrophobic and Anaal Nathrakh but with more brutal death like the TXDM bands listed earlier in the interview.

Live, we have a lot of stage energy and expect a wall of blast beats and grooving headbang sections. We also pride ourselves in trying to sound as much like the album when live as much as we can.

Thanks for the opportunity to interview! We’ll see you in the pit!
–Phil

WoB is definitely one of the more recognized TXDM bands in the underground circuit today. They show no signs of slowing down and anticipate an even busier year to come. To hear more tracks, check out merch or look up show dates for the live experience, visit www.whoreofbethlehem.com.