OPPOSITE OF THE LIGHT

Communicating with the dark

In 2010, one of the most potent of venomous artists in the black metal circuit had formed in San Antonio, Texas, and for the next eight years would continue to let their music wither everything that is pure. They call themselves LaSanche (LS) and this project was to musically go “even deeper into the abyss” than any other previous project vocalist / guitarist Bjorn Haga had experienced, as he described publicly on their Facebook page.

Although uninformed of the origin or definition of the term “LaSanche,” RoM – TUJ learned more about this incredible force in the San Antonio blackdeath arsenal in a recent exchange of words with Haga. For those that have yet to hear any material from LS and to give this band’s audio true justice from the many live videos available, the following 2012 demo EP “Death Magick” is provided below:

Guitarist for over thirty years and previous member of Necrovore, Thornspawn and Hod, frontman Haga made it his mission to build a band around a recognition of a “spiritual current that lies within extreme metal” understood as the “Cthulian Current” as it was put in a small article from NumberOneMusic.com.

“..he began the infernal meditations that would evoke the blackened hymns that would find their way into what would become LS,” their Facebook Biography portion said. Yet Haga sent a much clearer message to RoM – TUJ when he elaborated:

Since their start in the blackdeath circuit, they’ve shared the stage with the most unholy of the state and beyond which lead to wonder which shows were the most memorable for LS thus far in their career. Once again that curiosity was put to rest.

“Every show we play,” Haga said. 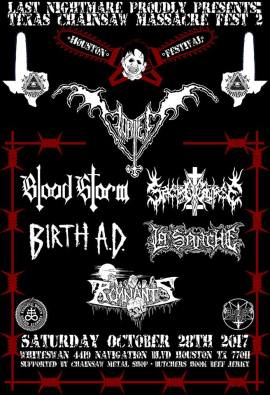 In 2012, the original lineup–Haga, Joe Gonzales – guitar, Chris Rossmeier – bass and Brian Gastelum on drums–released the 4 track demo “Death Magick” which Haga revealed to RoM – TUJ that after handpicking this roster at the time he could bring to life his vision for the signature sound.

“I knew going in that this is what I wanted LS to sound like,” Haga said.

The end result, however, was something less desirable in Haga’s eyes, RoM – TUJ discovered from the NumberOneMusic article. First off, the product had poor packaging and the band logo cannot be seen, yet this was not an issue to Haga at the time.

“I didn’t fucking care what the demo initially looked like,” Haga said in the NOM article. “No one pays attention to the artwork anymore as most people nick it off the internet.”

He then later revealed in the same article that he felt the performance from his band mates at the time were not at their fullest potential, which is why the current lineup were said to be re-recording some tracks to show the band’s true talent level. 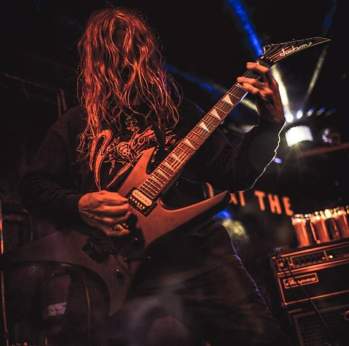 [all three photos courtesy of Necroblanca Photography and Design / necroblancaphotography.com]

“It finally feels like a finely tuned engine firing on all cylinders that is ready to be let loose upon the asphalt and chew up the road,” vocalist and guitarist Haga said in the NOM article.

In fact, Haga revealed to RoM – TUJ that LS 2018 is currently finishing recording the debut album. Considering Haga’s perfectionism, this album should demonstrate a well executed and adrenaline-fueled blackdeath performance.

Only time will tell if the debut album will raise the “Cthulian Current,” as Haga acknowledged it. But if there’s one thing RoM – TUJ learned and took away from this experience is that Haga said it best when he made it clear what to always expect from LS: